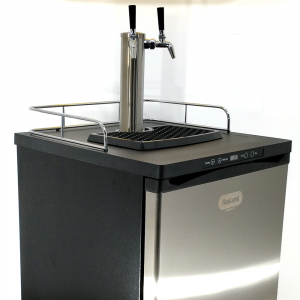 Shortly after the pandemic started last year, my wife brought up the purchase of a kegerator. She’d put together a spreadsheet, and—given how ubiquitous and expensive four-packs had gotten in the Bay Area, at least—that spreadsheet indicated that the payback time for a used kegerator would be pretty quick (especially given the prospect of having to bunker down for many months). We bought a two-tap used kegerator from a guy up in Healdsburg soon after my wife wooed me with data, and it’s proven to be one of our smartest beer purchases yet.

First, quick downsides: Kegerators obviously aren’t for everyone, and ideally the purchase of one would increase the quality of beer consumed rather than the quantity. Take good care of yourself, first and foremost, and recognize that the ability to pour any amount of beer at any time is probably one of those “With great power comes great responsibility” situations. That said… the upsides have been many. Beyond accumulated cost savings, we’ve never been able to have such consistently fresh beer—particularly with a lot of retail beers sitting on shelves, and/or stuff only being available for curbside pickup (i.e., no chance to look at date codes). We make fewer trips for beer acquisition, reducing our risk factors during a pandemic. And, given the shambled state of draft beer out here, a lot of our local breweries that didn’t offer kegs direct to consumers before have started to, significantly expanding local options. When we do buy cans and bottles now, it’s stuff we’re excited about rather than overpriced staples.

Have you taken the kegerator plunge yet? Been considering it? What’s your favorite part of kegerator life—or, what’s been keeping you from it? Hit us up on Twitter @RareBeerClub.