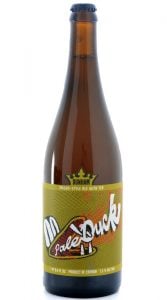 One of the two featured craft beers in The Rare Beer Club this month is Brasserie Dunham’s Pale Duck, a dry-hopped and tea-infused saison that has Dan Cong oolong tea added just prior to botting. Eloi and company over at Brasserie Dunham wanted to develop a new beer with tea based on one of their core offerings, Leo’s Early Breakfast IPA: a collaboration with Anders Kissmeyer that includes guava and Earl Grey tea atop a more traditional IPA framework. At least one beer made with tea has been featured in the Rare Beer Club previously, as some of the club’s long-time members may recall Biere de Goord: Jolly Pumpkin’s green-tea saison.

If you’re enjoying Pale Duck, or just curious about beers with tea to try, you’ll likely have a few options available nearby.

Dogfish Head’s Sah’tea, which originally debuted back in 2009, was probably my first tea beer (as was true for a lot of folks), although it’s been bit since this one’s seen a bottling. Modeled after a Finnish beer from the 9th century, the wort for Sah-tea is “caramelized over white-hot river rocks,” and uses foraged juniper berries and black tea.

And Fantôme’s Magic Ghost specifically incorporates green tea in its funky and strong Belgian ale framework. (And now that I look it up… It was featured by The Rare Beer Club way back in 2011.)

Lots of breweries are experimenting with different types of tea as of late. Got a local beer option made with tea you’re digging? Let us know what’s good on Twitter via @RareBeerClub.