What is a Winter Beer?

As we approach the holiday season each year, as sure as you can count on the 1964 cult classic Rudolph the Red Nosed Reindeer to deliver the goods, you can also count on quite a bit of confusion about what winter beers are and whether or not they’re different from Christmas beers and winter warmer beers. It’s okay. We’re here to help.

What are the Differences Between Winter Beer Styles?

Of all the craft beer styles and seasonal beers out there, we’re particularly fond of winter beers. It might have something to do with the fact that they generally have larger ABVs and tend to be fuller bodied interpretations of some of our favorite beer styles. Some are spiced, usually with ingredients you might associate with the season, like nutmeg, allspice, ginger, or cinnamon, while some are not.

US craft winter beers are often spiced and mostly referred to as Christmas or Holiday beers. The UK is most commonly associated with Winter Warmers, which tend to be full-bodied, darker, malt-driven styles, and are not usually spiced. “Warmer” usually equates to bigger ABVs, hence the idea that they warm you up a bit. The Belgians tend to be sparing with spice and make larger gravity versions of their core year-round beers.

It’s tough to give a concise description of exactly what classifies a beer as a Christmas beer. Brewers, in their infinite creativity, are constantly blurring the lines, but for the most part, they all have something a little extra special about them. Whether it’s an aged, high-ABV version, a spiced variation of one of the brewery’s flagship beers, or something completely unique, Christmas beers can come in many styles.

Some of The Best Winter Beers Over the Years

You won’t have to look hard to find quite a few curated lists of “The Best Winter or Christmas Beers,” so I thought it would be fun to take a slightly different approach and share some of my personal favorites that we’ve featured in one or more of our 5 distinct monthly beer clubs over the years. 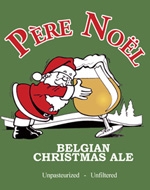 We’ve only featured Père Noël once, but were just recently considering running it again because it’s so damn good and the importer only brings in about 250 cases a year. It’s Belgian, so it stands to reason that any spice additions take a back seat to the core yeast flavor components and the beer’s big, herbaceous hop qualities. The core flavor profile offers generous tree fruits (think pears), a decisive pepper contribution, and soft citrus acidity. All in all, a really well constructed, flavorful beer. And you gotta love the label art, which shows Santa’s loving embrace of a tulip glass full of the stuff.

Now that we’re 10 years into The Bruery’s 12 Beers of Christmas Vertical Series, we can safely say that the second offering in the series, 2 Turtle Doves, was hands down one of the standouts. It embodies what we all tend to associate with a Christmas beer perfectly. In short, it’s a big, boozy, rich, malt-driven flavor profile offering bitter chocolate, woody aromatics, gin-like juniper and alcohol notes, and a lingering toasted pecan and roasted malt finish. Some serious yum factor going on here. 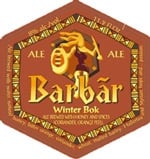 Decisively Belgian, we found plenty of Belgo yeast fun stuff: cloves, coriander spiciness, and orange peel were noticeable in this tasty winter ale. It also had lots of dark fruit notes, cherry preserves, and a mead-like honey characteristic which we found really nice. It goes down a bit too easy for 8%, so be wary of the photocopier at this year’s company holiday party if you’ve had more than one. Barbãr finishes quite floral, with spicy edges, honey spiced with ginger, and a touch of ripe figs. You’ll dig it. 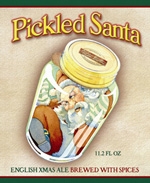 Ridgeway Brewing Company produces a bunch of fun winter warmers and holiday ales, most of which sport colorful names like Bad Elf, Insanely Bad Elf, Santa’s Butt, and of course, our favorite in the lot, Pickled Santa. The brewery uses fresh spices, not spice extracts nor pre-ground blends, to make this baby, and it shows. We felt the beer was a bit of a cross between an ESB (Extra Special Bitter) with its drinkability and moderate bitterness, and Winter Warmer, with its intriguing spiced character. Big, sweet, malty notes complimented by allspice, nutmeg, cinnamon, and clove. Worth a test drive in any sleigh.

Mikkeller makes a different version of this bad boy every year, and of the many, many versions we’ve tried from the highly respected Danish Brewery, the 2014 edition featured in The Rare Beer Club has been our favorite, so far. Think of the milk chocolate and cocoa richness of a generous imperial stout combined with a spicy yeast character and rich notes of softer caramelized sugars. A stocking stuffer that won’t leave room for much else, but will be received much, much better than wool socks or a chia pet.

I know, I know, another beer from Denmark with “Santa” in the name. Right about now, you’re probably thinking that’s all it takes to make this list. Don’t get me wrong; Santa’s the man, but you’ve gotta do more than name drop to make this list, baby. It’s 10% big and 100% shameless to be sure. Closer to a Belgian-style quad than anything else, To Øl’s Shameless Santa differs in that it offers up a prominent bittering component. You’ll get plenty of burnt caramelized sugar notes, but also firm, hop-based citrusy and spicy qualities. This is some seriously tasty nectar to be coveted with good friends in front of a blazing fire, preferably in the middle of a snowstorm with the power out.

If you’ve gotten this far, you may be wondering why I cut the list off at six. There’s no particular reason. I kind of like ending with three sweet “Santa” beers and I’ve got to get back to lining up this year’s Christmas beer offerings. We run seasonal beers year-round in each of our beer clubs and we take product selection quite seriously. I invite you to give us a try, or gift a membership to that favorite beer geek in your life. Just be sure he or she shares the holiday spirit with you!